It was a Thursday evening. The trip back from the family funeral had not gone well. It took time to return to being my bouncy self.

Just when I was feeling better… 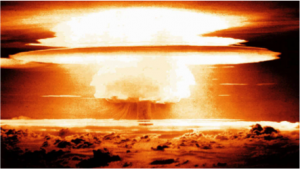 No, not one from a foreign threat. It was that 10 second nuclear wasteland created by opening an electronic messaging device.

You know, that unwanted email, curt text, political Facebook posting or fake news article that sends a torrential rush of blood to your head.

In less than 10 seconds, I went nuclear.

A member of a volunteer board I’m on sent an email to the entire board, alerting me personally, of my need to watch my typos, without any specifics.

My brief bouncy moment was pulverized.

I exploded like a mushroom cloud, pounding out a reply-all response with my resignation. It just wasn’t worth it. Working hard and being criticized publicly. The NERVE of him. And I don’t even get paid!!

Then….. thinking that I was actually doing the right thing ……. I did the dirty deed.

I hit the proverbial red button to launch the warhead……. I hit send.

My work entails explaining to conflicting couples the brain neurology that makes the pre-frontal cortex, the rational part of the brain, virtually inoperable once one is upset.

When in fight-or-flight, the protective brain moves blood out of the region that weighs and measures consequences and into the area that fights, freezes or flees. Thus, making it the absolutely wrong time to hit send.

A firm believer that there will be no world peace until we can each personally act peaceably. I knew I had just started a war, and I didn’t care.

That’s the really scary thing. When our brain is on adrenaline, instinctual survival mode kicks in. We think our actions are absolutely defensible. Yet, we are momentarily incapable of empathy…. or wisdom.

The consequences of a Brain Bomb are messy and embarrassing.

This was proved to me by what followed my foul deed. Further angry emails, misunderstandings and later, apologies all around. All could have been avoided—if I had simply followed these seven steps:

Let go of the cell phone. Close the computer. Shut down the screen. Immediately.

Your brain has just been shot with a bullet of adrenaline. You are wounded. You need immediate attention.

This is NOT the time to continue using the offending device. You are in real danger of further harming yourself or others. Closing or letting go of the device guarantees preventing more damage. Stop. Drop. And roll if you have to. That thing is too hot to hold.

If you are sitting, stand. If you are standing, sit. Change your body position. If you can, take a walk outside, a bathroom break, go get a snack, take the stairs.

The simple act of moving will help to release the blood that’s cursing through your large muscles making you feel like you want to kill something. This is real, scientific, physiology. Don’t fool around trying to control your brain. Give your body what it wants. Move.

Practice radical self-care. Admit you are upset, hurt or embarrassed. Our body feels emotions as adults the same way it did when we were in middle school. It hurts. We think we are older and should be more mature now. We kid ourselves that we can handle the injury and just keep going. Physiologically, this just isn’t so.

Your body is reacting. You must get yourself under control before you do anything else. It’s that “put your oxygen mask on first” theory. You need to attend to you.

Simply describe what you are feeling in your body, without running the justification for your hurt around in your head. For example, “My chest is tight. My arms are hot. My stomach feels like someone just punched me.”

As you think of each body part that holds a sensation, allow it to relax. Consciously relaxing muscles further inhibits fight or flight until we calm down enough for the brain to think.

As you feel the sensations in the body, take three deep breaths and exhale fully. This will literally slow your brain waves down so you can begin to get blood back to the part of the brain that considers actons. Feel your feet as you exhale. Wiggle your toes. Now the blood in your body is beginning to balance.

Change your mental focus from the thing that offended you to something innocent which gives you that “Awwwe” feeling. The energy of love automatically raises your vibrations and relaxes the body. I have a picture of my dog wanting a hug that I keep in my wallet at all times.

Babies, puppies, kittens and motorcycles work, too. Just as long as you think of something that feels good to you, your body will relax.

Whenever possible, don’t respond for 24 to 48 hours. Focus your attention on anything but the offending message for a while. Most things really aren’t urgent. Chances are, after a good night’s rest you’ll have your clarity, wisdom and maturity back.

“I’d like to really give some thought to what you are saying here. I’ll get back to you in 48 hours.”

Keep your response date as far off as you can. The calmer you are, the smarter you will be.

In our polarized society, most of us are in fight-or-fight as a normal way of being. This makes our triggers and hot buttons extremely volatile. Being peaceful and kind to each other is the way to a more peaceful world.

And for me, a regular meditation practice makes following these steps, much easier to follow. Unfortunately, due to the family crisis, I had relaxed my daily practice. I wasn’t in the best mental condition when the nuclear note arrived in my inbox.

On reflection, my Critical Mother button was pushed big time, making it even harder to keep my cool. There’s always some personal healing work to be done. It’s important to be gentle with yourself as we all learn to live in a fast-paced, reactive world.

After I calmed down, reviewed this volunteer position, and my ability to benefit the organization after this incident—I still resigned.

Sometimes your first instinct is the best.

Yet, given the chance for a re-do, I’d have handled it all in a much more strategic, professional and peaceable way.

>>Download your FREE How to Stop a Nuclear War guided meditation

For a private, personalized hypnosis session call me at 650-722-1956 or email me at Cynthia@CynthiaBeck.com.